Yesterday, I finished my first ever NeurIPS conference. It was a great experience, as I got to present some of my recent work and get feedback, meet friends from around the country, learn about awesome research in many fields, and listen to some of the foremost minds in all of machine learning! Now that I'm cooling down, I have a bunch of thoughts on the conference, as well as some advice for future NeurIPS-goers.

The most important thing you can do to get as much out of the conference is have a plan for everything you do. Otherwise, you'll just get lost among the thousands of people.

One thing you absolutely need to do is prepare for the poster sessions beforehand, since each session has hundreds of people presenting. What I did was go through each of the paper tiles and abstracts before the session, and write down the titles and locations of each poster I wanted to visit. 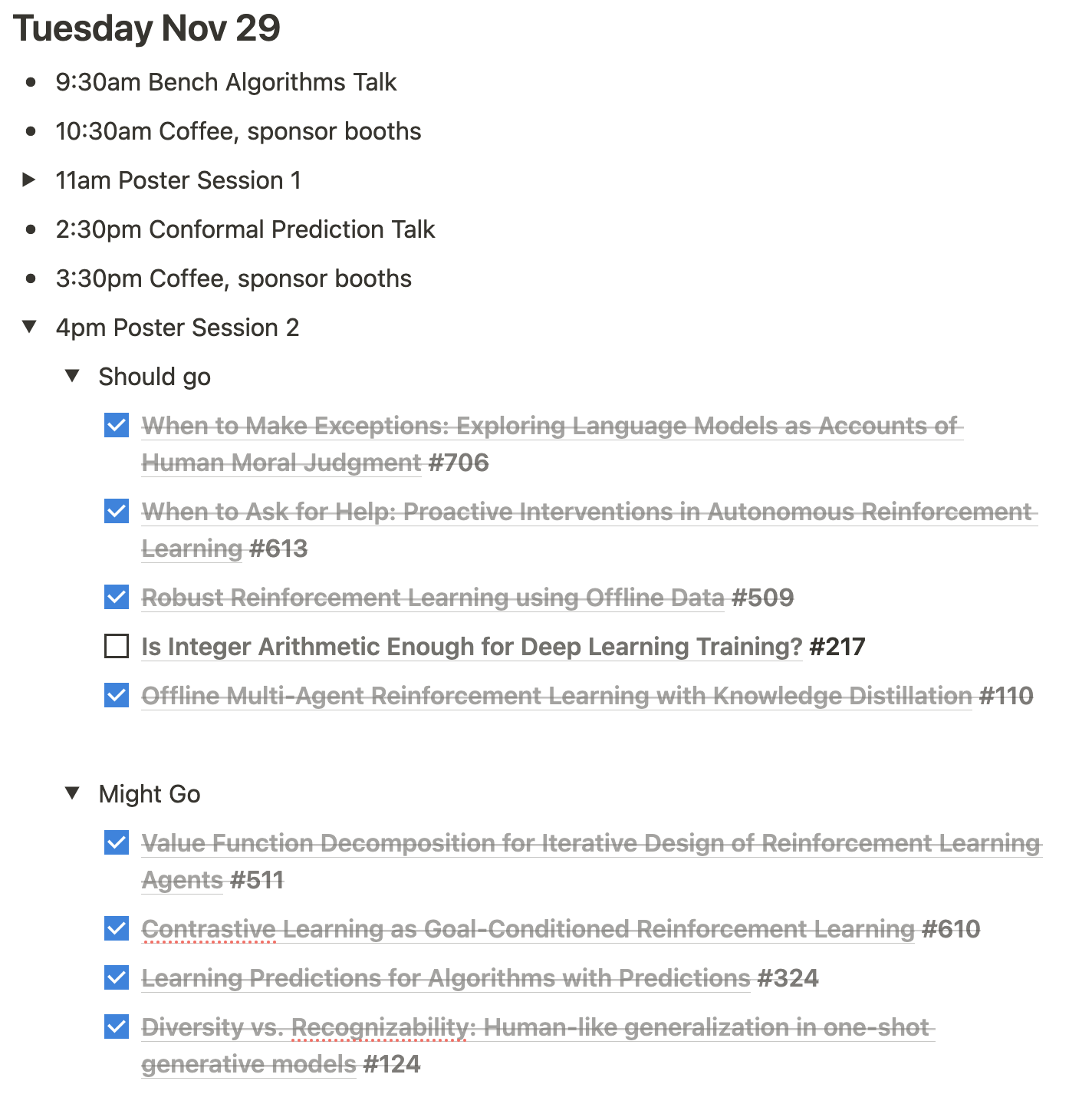 This goes for everything else as well - figure out which socials you want to attend, which talks to listen to, and which workshops to visit. 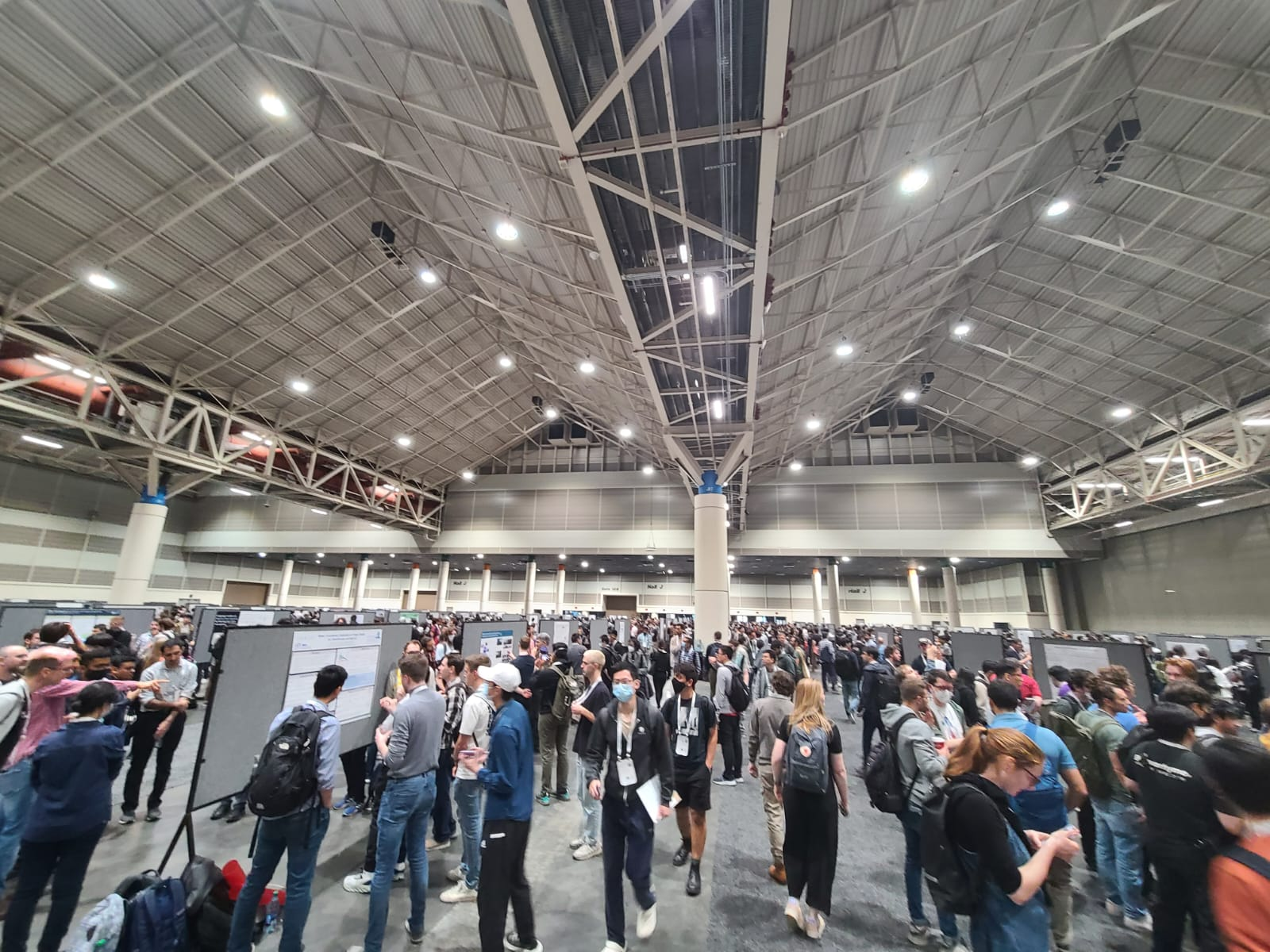 When you put eight thousand computer scientists into a single event, things tend to get chaotic. The poster sessions were jam packed, and there is basically no opportunity to talk to any presenter when there was already a crowd of people surrounding each poster. I got the most out of the sessions when I went 30 minutes early, and talked to the people as they were setting up, so I could actually have one-on-ones without trying to get through the crowds. I'd definitely recommend doing this in the future.

The wifi also didn't work at all for most of the people I talked to. Plan on using mobile data, ideally an unlimited plan, especially if you're planning on hot-spotting to your laptop.

A lot of advice I read beforehand was that the real networking happens during the social events happening in the evening, especially the invite-only sponsor parties. However, I didn't really find this to be the case.

My first day, I went around all the sponsor booths, collecting swag, figuring out who's hiring (Meta still is, DeepMind has a hiring freeze), and attempting to get into the sponsor parties. I was able to get into Two Sigma, OpenAI, Vessl, and D.E. Shaw, but like most things at NeurIPS, they were very crowded and not super well organized, which meant networking wasn't easy.

The "official" socials I went to were mostly better. The RL social was also chaotic, but the Space social, ML Safety social, and Interdisiplinary Mixer were all quite organized and I could have better conversations with more people. Some advice I got before the conference was that the best part of the conferences are the workshops, and in general I'd agree. The fact that the sessions are organized by topic, with plenty of expert speakers at workshop meant that I could immerse myself in research closer to my own interests.

On Friday, the main workshop I went to was the Human-in-the-Loop Learning workshop. Indeed the reason I even attended NeurIPS was to present at the HiLL workshop. Overall, I had a really great time presenting my work and got some ideas on new directions to take. If I had to suggest something to improve, it would be that the invited talks would be shorter (maybe 15-20 minutes instead of 30), and have more time for presenting posters, discussions, and even have a break in the middle for lunch, since I had to skip a talk to get something to eat.

On Saturday, I mostly alternated between the workshops on Foundational Decision Models and RL for Real Life, with a little bit of time at Human Evaluation of Generative Models. Because there were so many events at the same time, it was again critical to figure out beforehand where I wanted to be at any given time, so I could spend the actual day focusing on the content

NeurIPS is very tiring, so don't feel like you have to do everything. The four days of the main conference, you're essentially on your feet walking for most of 12 hours - I averaged over 20k steps per day!

For the first few days, I brought my laptop to the conference, but carrying this around was a bad idea, and caused me a good amount of shoulder soreness. I was able to work a bit during downtime, but not enough to justify having it. Ideally, I would just go back to my hotel to use the laptop during downtime, but this wasn't practical since since my hotel was a 30 minute walk away (why is the NOLA convention center so long!). Probably next time I’ll spend a bit more to get a hotel much closer to the hall.

In general, don't be afraid to plan to skip some events. You won’t be able to do everything anyways, so its better to keep your energy up.

Overall, I had a great time at NeurIPS. I certainly took away a lot from coming here and plan to be back in the future. Hopefully this post is useful for others planning to attend their first NeurIPS or other conferences. 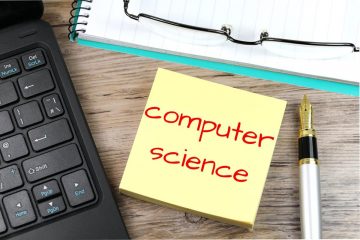 What every computer science major should know (to get an internship)

When a new student is starting their journey into the field of computer science, it can be hard to figure out which topics to learn first. In this post, I will give my opinionated review Read more…